← back to
New Focus Recordings
Get fresh music recommendations delivered to your inbox every Friday.
We've updated our Terms of Use. You can review the changes here. 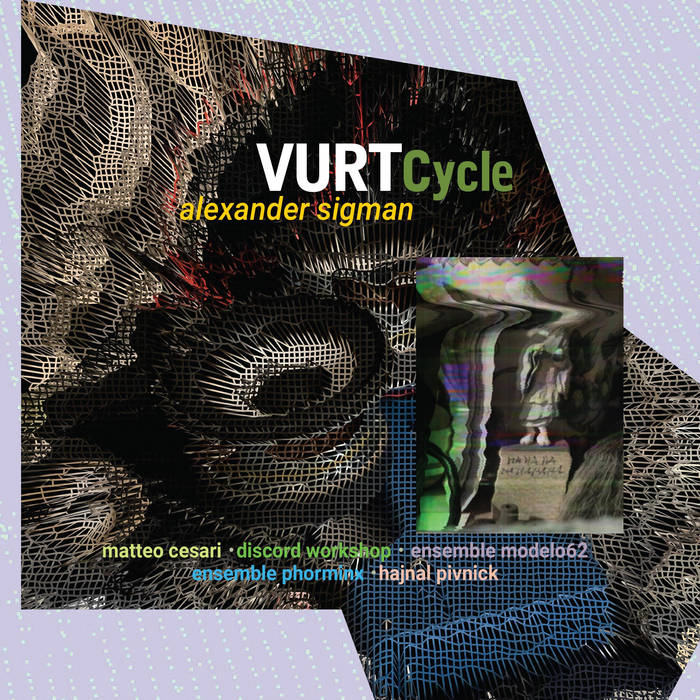 On his second release for New Focus, composer Alexander Sigman turns to science fiction, specifically the work of UK based author Jeff Noon, for inspiration. Using his dystopian novel "Vurt" as a jumping off point, Sigman maps paradigms active within Noon’s work on musical parameters, tying the works in the "VURT Cycle" together through several recurring principles. Noon’s exploration of the hybridization of species manifests itself in Sigman’s interest in recycled musical material; the characteristics of parallel universes in "Vurt" are expressed through the dichotomy and integration of live instruments and electronics. The pervasive portrayal of urban decay and ruin creeps into Sigman’s works as a sonic frame, and the influence on Noon of British New Wave bands shows up in samples in Sigman’s electronic palette. Sigman conjures an unfamiliar, futuristic world in the music of the "VURT Cycle," expertly capturing science fiction’s penchant for challenging assumptions and extrapolating possibilities.

The opening work on the recording, "VURTRUVURT" for solo violin and electronics performed here by Havnal Pivnick, employs an unconventional method for the media playback. The electronic sounds are projected through a pair of small sound “exciters” attached to the violin and a resonating glass surface, placing the violin in a dual role as producer and conduit of sound. The piece opens with mechanistic whistling sounds, evoking unmanned machines creaking in an abandoned factory. The violin enters in anxious fits and starts, with microtonal double stops and tremolos. Fragments of songs from the Manchester bands that Noon cites as influences pepper the electronics and inform the violin material, echoing a world that exists on the other side of a vast chasm.

"atrocity exhibition" for ensemble and electronics is also shaped by the legacy of Manchester pop, specifically the Joy Division song of the same name and the J.G. Ballard stories that inspired it. The instrumentation Sigman chooses splits the ensemble into three categories to mirror the diversity of creatures populating Noon’s Vurt: electronic (electric violin, electric guitar, and electric bass), mechanical (prepared piano), and animal (horn). Using sonic models from field recordings, urban sounds such as car horns, and glitchy electronic sounds evoking malfunctioning systems, Sigman builds constellations of interrelated, dynamic sound spheres. Citing the trance oriented introduction to the Joy Division song as the impetus for the piece, Sigman’s work is decidedly less static, but shares a character of non-linearity for all but its closing minute and a half, when the isolated islands of sound accumulate into something that resembles a system malfunction.

Sigman’s setting for "down the bottle" for bass flute, electronics, and sound installation is “Bottletown,” Noon’s decaying former recycling center that symbolizes the crumbling urban infrastructure in "Vurt." Sigman builds imagery into his score by constructing the sound installation with broken glass shards on a glass pane. Throughout the work, we hear the sound of glass shattering and shimmering underneath and around insistent two note utterances in the bass flute.

"le jardin des supplices" for bass flute, violin, cello, and live electronics is inspired by a 1899 novel by French author Octave Mirbeau, literally translated as “The Torture Garden.” Mirbeau’s work was a point of departure for Noon, and here Sigman creates interdependent relationships between instrument layers (or metaphorical“victims”), with the strings merged as a pair and the bass flute mediating between them and the electronics. This is, in a sense, process music, albeit unsettlingly so -- armed with Sigman’s metaphor we can hear a slow degradation of the integrity of each layer of material, as they become “progressively hollowed out by parasitic external influences.”

The final work in the VURT Cycle is "dIXsf," scored for flute, clarinet, trumpet, electric guitar, bass guitar, percussion, piano, violin, and cello. The nine member ensemble is divided into sub-groups with shared expressive characteristics, and Sigman mixes and matches the groups to create hybrid configurations. In the opening minute of the work, glissandi manifest themselves in various guises on different instruments, connecting punctuated accents and the resonances they leave behind. When the strings enter, they introduce unstable sustained pitches and thin tremolos, and soon after one hears similar material in the clarinet and guitar. Sigman’s hybrid concept is a dynamic one, with musical ideas infecting other instrument groups, evolving due to inherent instrumental differences as well as the intentional distortion of the initial gesture. The work culminates with what Sigman describes as a dirge, an inexorable and labored march wherein the fragmented ensemble attempts (and apparently fails) to fuse together into a symbiotic organism. A coda, dedicated to David Bowie, scion for many a band in Manchester and beyond, begins with an ensemble cacophony before the piano finishes the work with a series of flourishes and towering, resonant chords.

Alexander Sigman’s affinity for science fiction shows up in his thirst for musical innovation and his fluency in creating musical analogues to thematic concepts. "VURT Cycle" is a sound world constructed from patterns of sonic interrelationships that generate unique and otherworldly results, sometimes unsettling, but always grounded in tight aesthetic underpinnings.

Mille Petrozza stops by to talk about the new Kreator album, plus music by Trauma Bond